We'll walk you thru all the steps and settings

If you have a .BAT file and you’re trying to get it to run automatically using Task Scheduler in Windows, you might have run into the issue where it simply doesn’t run unless you manually run the task.

I created a batch file that deletes everything inside a temp folder whenever the computer starts up. I created a basic task in Task Scheduler and hoped for the best. Unfortunately, nothing happened when my computer booted up. After a lot of trial and error, I figured out how to get the script to run.

In this article, I’m going to walk you through the settings and permissions you need to adjust in order to get your batch file to run without manual intervention.

The first step to fixing this issue is ensuring that the account you are using to run the script in Task Scheduler has Full Control permissions on the folder containing the script, the script itself, and any folders/files that the script touches when it runs.

For example, I created the following batch script below: 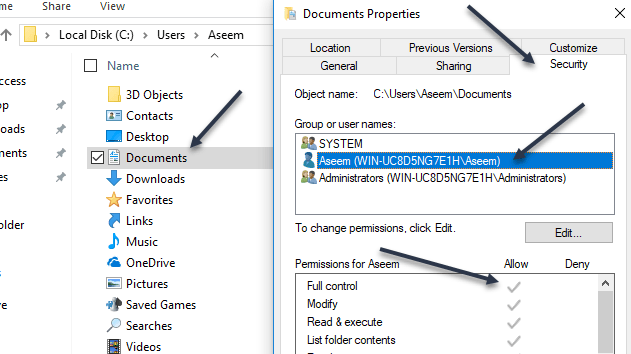 As you can see, the user account Aseem has been explicitly added and given the Full Control permission.  Now you have to do the same thing for the folder that contains the script and for the script itself. Don’t just assume that if you give permissions to the folder containing the script, you’re good to go, because you’re not. Lastly, set permissions on any files and folders that the script will interact with.

In my case, I had to go to C:\test, right-click on that folder and add my user account there with Full Control permissions. It’s kind of annoying that you have to do this, but it’s the only way to get the script to run. 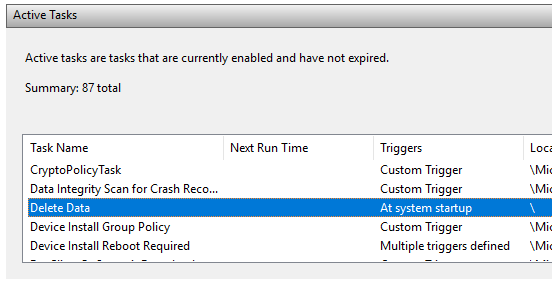 There are several tabs and a couple of things have to checked and changed here. Firstly, on the General tab, you need to check the user account that is being used to run the task. In my case, it’s the Aseem account, which I had given permissions to earlier on the file system and which is part of the Administrators group on the computer.

Next, you have to choose the Run whether user is logged on or not option and choose Windows Vista, Windows Server 2008 in the Configure for box. 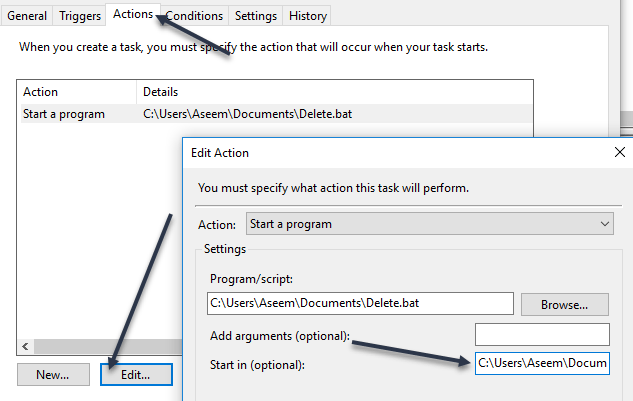 On the Actions tab, you have to select the script, click on Edit and then add in the path to the folder containing the script in the Start in (optional) box. This may seem unnecessary, but it’s not. In my case, I put in C:\Users\Aseem\Documents\ in the box. 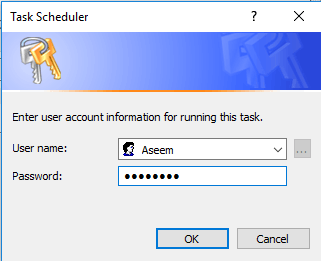 Lastly, you should run the task manually once in Task Scheduler to make sure it runs. If it runs fine manually after you changed all the settings, then it should run when it’s supposed to be triggered. In my case, it was supposed to happen on startup and after I made the changes, everything worked fine.

Note that if your script is accessing different computers in a domain when run, you should try to use the domain administrator account to run the task. This will ensure the account has enough permissions to access the remote computers.

Another item to note is if your script accesses resources on a network share. If your script is using letters to access the network, it may not run. For example, instead of using F:\data\, you should use \\machinename\share_name\data\ in the script. If you still can’t get your script to run, post a comment here and I’ll try to help. Enjoy!

O&O ShutUp10 Review – Stop Microsoft From Spying on You

Antivirus for Chromebook: Why You Need It and Best Options