Reading: iPod Shuffle Bricked, Not Charging?
Back To Top

I recently came across an issue with a Apple iPod Shuffle that wouldn’t power on. It was simply operating correctly one day, and the next day, it refused to power on. At first I figured the device was bricked and it was time to be thrown to the garbage. However, a unusual fix got the iPod working again.

This particular model of iPod Shuffle was a second generation (pictured above). However, this simple fix may work on other models of iPod Shuffle also, as well as Nano and Classic iPods.

Upon trying to power on the what seemed to be a dead iPod Shuffle, I was getting absolutely no playback, activity lights or anything from the device. I even tried doing a manual unfreeze/reset: 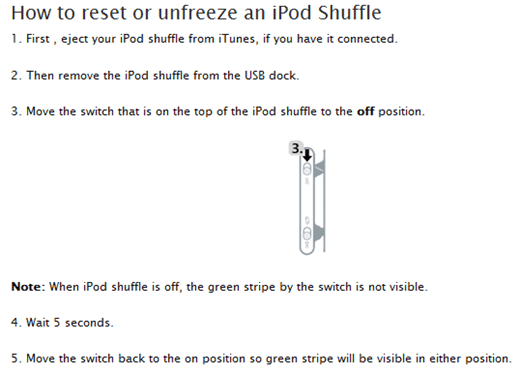 With that not fixing the iPod Shuffle, I figured that the device was bricked. The iPod had no signs of activity, and even when connected to the dock and plugged-in to a USB power outlet adapter, the iPod Shuffle simply would not blink any activity lights.

Next, I tried the cave man method and picked up the iPod shuffle and proceeded to slam it down onto a table (attempting to shuffle the Shuffle), figuring maybe there was a loose connection or internal part going out.

With that not fixing the iPod and the manual reset doing nothing, I quickly noticed something. This particular iPod Shuffle had been sitting there charging using a power outlet to USB connection. Thus, maybe the power outlet was bad.

Well, I tried plugging another device into the same power outlet and it was fine, so that wasn’t the case.

However, upon disconnecting the iPod Shuffle and dock from the power adapter, I figured it wouldn’t hurt to try and see if it would respond to iTunes. Thus, I opened iTunes on the PC, connected the iPod to a open USB port, and hey, it fixed the issue.

The iPod Shuffle was automatically detected by iTunes and it instantly began charging, activity lights operating correctly, etc. Upon testing the iPod, it now is fully functional and operates great. So, if you have an iPod Shuffle that you believe may be bricked, and use a USB to power outlet adapter to charge the iPod, try downloading the latest version of iTunes and connecting the iPod to your computer. That may be the fix!

How to Install IIS and Configure a Web Server in XP