These 7 methods should help you out

I recently ran into a problem where all my restore points in Windows were disappearing. If I created a system restore point and then restarted the PC, the restore point would be gone! I could not figure out why this was happening, but after doing some research I managed to get the problem fixed.

In this article, I’ll write about a few methods you can try if your restore points are missing in Windows. If you’re still having issues with missing restore points, post a comment and I’ll try to help.

The first thing you can try to do is disable system restore. How does this help? Well, the backups are stored in the System Volume Information folder. If this folder gets corrupted, then you will have to delete it. You can do this by disabling System Restore and then enabling it again.

Right-click on Computer or This PC and choose Properties. Then click on the System Protection link. 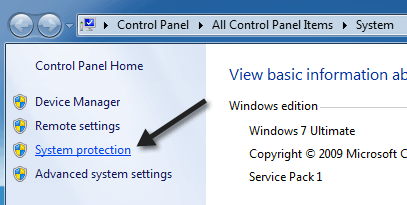 Then click on the Configure button on the System Protection tab. You should also see that it says On for the current drive. 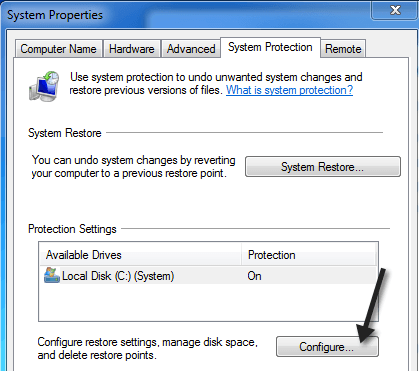 You’ll get a message asking if you really want to do this. Note that doing this will delete all previous restore points since that backup folder is being deleted. 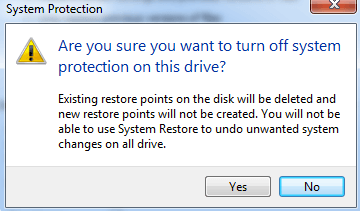 Restart your computer and then go back and turn System Protection back on. Now try to manually create a restore point and see if it disappears when you restart the machine.

Following from above, if you go to Computer, Properties, System Protection, click on Configure, there is also a section pertaining to disk space usage. Make sure that this value is not something tiny. System Restore needs a certain amount of space and old restore points will automatically be deleted if there is not enough space on the disk. 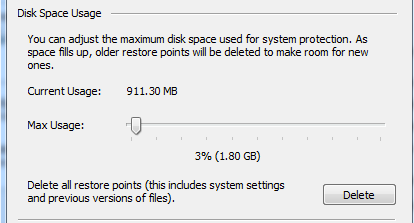 Another thing to check is the actual disk space left on your hard drive. Sometimes you may not realize and suddenly you only have a 100 MB free on your hard disk! That would also be something that would prevent system restore points from being created.

Mostly, antivirus programs won’t cause this problem, but on occasion you could run into some setting or program that prevents the creation of certain files. It’s worth turning off the protection for a little while, creating the restore points and seeing if they stick around. For example, McAfee Quick Clean has an option called “System Restore Point Cleaner” that will do just that, so be careful.

Also, other third-party applications can cause this issue, so you’ll have to try and remember what programs you installed on your machine before the problem started occurring. This is especially true of those disk cleanup or tune-up programs that say they can make your computer 100% faster by running their software. A lot of times those programs do dangerous things to your system by turning off all kinds of stuff you would otherwise want to keep on. One program that came up was DisKeeper.

One user who had this problem found out that the issue was being caused by Microsoft Office 97. No clue why that person was using Office 97, but it was causing a registry conflict with Windows and preventing the creation of restore points. If you don’t have Office 97 installed, it could be some other program.

The other thing you can try is to create a restore point while in Safe Mode. If you can’t figure out which program or service is causing the issue and preventing system restore from working, you can still possibly create one by going to Safe Mode and then creating it. It may not work for some, but it seems to be a viable option for others.

If you are dual booting Windows with another operating system like Windows XP, Vista or Windows 8 and both operating systems are on the same physical disk, one OS may be causing problems with the other. Whenever you restart, the restore points may get deleted. I’m not exactly sure what specific setup would cause this, but it has been reported by users who dual boot, especially with Windows XP. Trying removing the dual boot or installing each operating system on it’s own disk.

A lot of viruses will erase your restore points, so you can never restore your computer to a previous time. It’s a good idea to run a full virus scan at this point if nothing else is working. Also, it’s best to run the virus scan before Windows actually loads. You can do this using Windows Defender Offline.

Lastly, you can try to run Chkdsk /f in Windows and see if there are any problems on the disk. You can also open a command prompt and type in sfc /scannow, which will scan all Windows files and replace corrupt or missing system files.

Hopefully, one of these solutions will fix your problem with missing restore points in Windows. If not, post a comment here and I’ll try to help. Enjoy!

How To Get Faster Internet Without Paying for It

What Is The Best Linux Distro For Gaming?

The 4 Most Secure Email Providers