Reading: Should You Upgrade to Windows 8?
Back To Top

Should You Upgrade to Windows 8?

Over the past few months, we’ve covered a significant amount of tips and hints regarding Microsoft’s upcoming operating system, Windows 8. However, we’ve yet to mention any tips regarding whether or not we would recommend Windows 8 to our site visitors and subscribers. 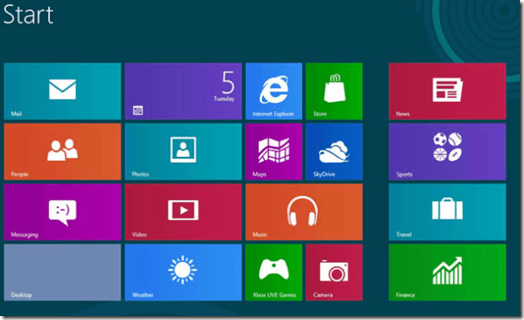 The fact is, many people will be updating their operating systems to Windows 8 later this month and many won’t. Windows 8 has been the primary focus of many tech blogs for the last few months, and many critics have dubbed Windows 8 as a flop; following Microsoft’s pattern of inconsistency, releasing a quality operating system, then a poor operating system:

With the tech critics and many others casting judgment on Windows 8’s new metro interface and other non-traditional features, many consumers may be a bit cautious about making the jump to Windows 8. However, I believe that the underlying factor of all of this criticism towards the new OS is simple… Windows 8 is different, so it comes off as an operating system that is complicated or difficult to understand. Additionally, using Windows 8 requires a slight learning curve and some change; most people do not like change and are creatures of habit.

With that noted, the best way to tell whether or not Windows 8 is an operating system that you will like is to simply download the Release Preview, so that you can try out the next gen OS for yourself. Still not sure whether or not to make the jump to Windows 8? Here are some tips that may be of help.

Actually, Windows 8 has a start screen… Dubbed the Metro Interface, which is tablet friendly. Windows 8’s new Start Menu is the single most controversial (hated and loved) feature of the new operating system. Many criticize the new metro interface as being too tablet optimized for use on a PC computer, but I don’t find it quite as hideous as many critics make it out to be. It’s different, and it does take some getting used to, but after you use it for a month or so, you may come to like the Windows 8 Metro feature. 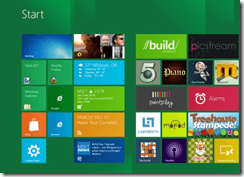 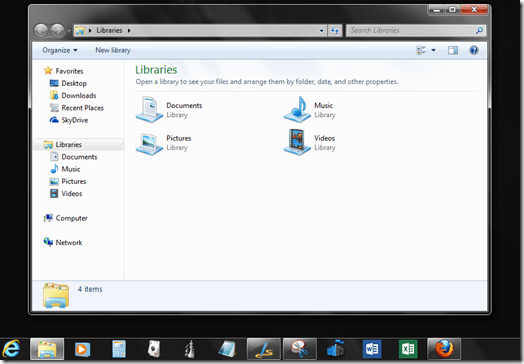 So, the Start Menu is gone and you now navigate to paths and directories in Windows using Windows Explorer. To launch apps and programs, you use the Metro UI. However, if you simply can’t use Windows without a Start Menu, you can add it back! The following add-ons can add the traditional Start Menu to Windows 8: 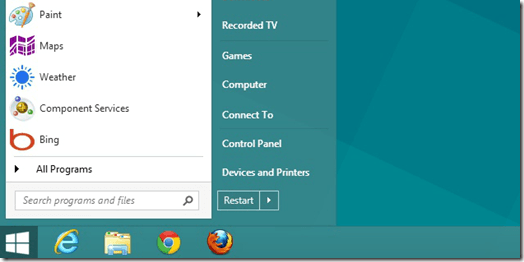 So, if you can add the traditional Start Menu to Windows 8… maybe the switch wouldn’t be too bad… considering Windows 8 has some other new features that you might like, which we will get to later!

Windows 8 being great for tablets, but not for enterprise or productivity…

When I initially started using Windows 8 and was just getting accustomed to the new operating system, I would have agreed with that statement. Without the traditional Start Menu, the home screen can be quite distracting. In tablet environments the Metro interface is sweet, but in an enterprise or productivity environment, one could care less about the visual appeal of the Metro UI… the traditional Start Menu is more productive, as it can be used to access apps, folders, files, and basically any path in Windows.

However, once learned and adapted to, 8’s Metro UI can actually be quite snappy. You just have to get accustomed to it. Need to launch an app quickly from the desktop, but don’t want to have to launch the Start Screen to get to the app? Simply attach it to the desktop’s taskbar.

Windows 8’s Metro UI could also be very beneficial in enterprise environments, but for that, program and app developers will need to get busy updating their apps to be Windows 8 friendly, incorporating live tile support, full screen app support, etc…

Here’s an example: If you were considering using Windows 8 in a IT business model or enterprise environment with updated and current apps, it may go something like this: 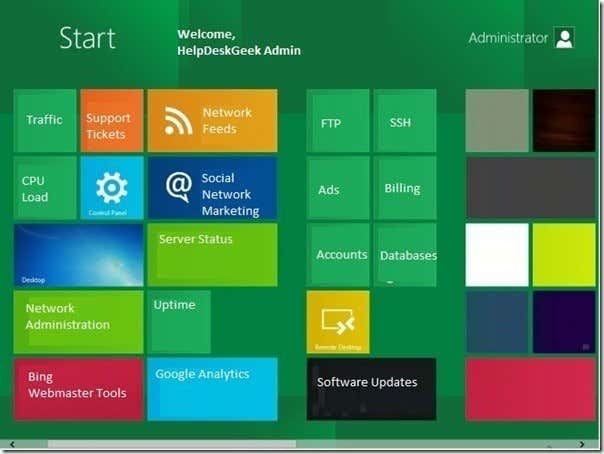 Of course, you would need to have all of your company’s apps updated to Metro UI compatibility. If the above screenshot included live tiles with status updates, it could be very beneficial in a IT business’s enterprise environment, even more so than the standard Windows 7 desktop.

Control panel interfaces tend to do great in enterprise as is, so with all of your company’s apps updated to Windows 8 compatibility, you could utilize the Metro UI as a main control panel, easily customizable to be specific for each department of your business.

While enterprise use is directed towards productivity, consumer use is more for fun and simplicity. Windows 8 does a great job of that as is, if you can get accustomed to the metro interface. Full screen apps in Windows 8 are cool, and the new apps in the Microsoft Windows 8 store, along with more Xbox compatibility, makes for a more fun PC consumer experience!

Should You update to Windows 8

As mentioned, the best way to go about Windows 8 updating is to try the free Release Preview first, then decide. However, I would recommend that you don’t use the new OS for a few days and then disregard it as being too different. Use Windows 8 for a month or so, then try out Windows 7. Which one do you prefer at that point? Remember, Windows 8 is only priced at $40.00 USD for an upgrade.

I believe that Microsoft has been bold in creating an OS like Windows 8. They have decided to make a major move and to do something different with this OS. I will be updating all of my PCs to Windows 8 because I like the new improvements that Windows 8 offers throughout, such as the new Windows Explorer Ribbon and the speed of the OS.

Even if you can’t stand the new Metro Interface, you can simply disable it using some online tutorials or regain the traditional Start Menu. From there, you can utilize the other updates to Windows that you may like, such as the new Windows Explorer, instant-boot and other technologies, while not being bothered by the Metro UI.

Thank you for stopping by the site for today’s post. Will you be updating to Windows 8? Or is Windows 7 still the better choice? Let us know in the comments!

How To Install Windows Applications in Linux