Reading: Restore Show Desktop icon in Windows Vista, 7, 8 and 10
Back To Top

Now on the far right corner of the taskbar

By default in older versions of Windows, the Quick Launch toolbar comes with a Show Desktop button, which allows you to quickly hide all open windows and access stuff on your desktop, and then quickly bring them all back when you’re done.

But what if your Quick Launch toolbar doesn’t have one? If your Show Desktop icon got deleted in Windows XP, you could always restore the Show Desktop icon easily. In Windows 7, 8 and 10, the show desktop option is now just a little tiny section at the very far right of the taskbar.

If you like, you can recreate the original icon and put that onto your desktop instead. Unlike most other toolbar buttons, the Show Desktop button isn’t a Windows Shortcut. Rather, it’s a Shell Command File (.scf), which is really just a plain-text file containing a special command Windows understands. To create a new .scf file, open your favorite plain-text editor (or Notepad), and copy and paste the following five lines:

Save the file as Show Desktop.scf (or any other name, provided that you include the .scf filename extension) anywhere you like, including your desktop. 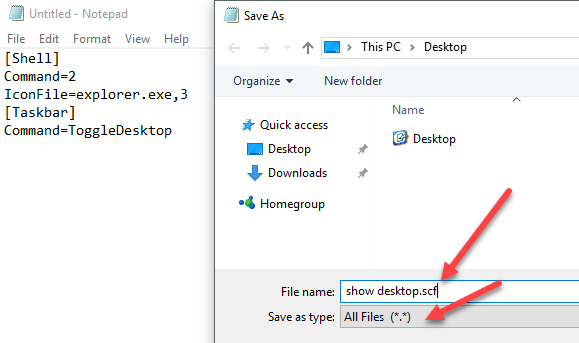 You should see the icon appear on your desktop:

If you click on that, it will move minimize all windows and show you just the desktop. If you double-click it again, it will bring back all the windows. Obviously, it’s not that useful sitting on the desktop, but there isn’t a simple way to add it to the taskbar. Check out this in-depth article if you want to move the show desktop icon to the taskbar in Windows 7, 8 and 10. Enjoy!

HDG Explains : What is SQL, T-SQL, MSSQL, PL/SQL, and MySQL?

How to Migrate a Firefox Profile the Right Way

VR Virtual Desktop Apps: Can You Actually Work in VR?