What is the Difference Between Primary/Extended Partition and Logical Drive?

And do you need to worry about creating them?

If you open Disk Manager in Windows (Start – type diskmgmt.msc) you will see your drive volumes and their corresponding partition type under the Status column. 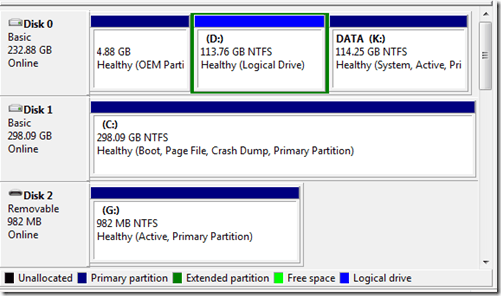 The extended partition is a holdover from earlier days, and was used when a drive had two or more partitions. It doesn’t actually hold data, it merely serves as a container for one or more logical drives.

Extended partitions and logical drives are more or less obsolete today (Windows Disk Management tool can’t even create them), but Windows will still shows the labels when you create a new simple volume.

So, do you need to worry about creating multiple partitions or logical drives? Well, the main reason to create partitions is to logically separate different types of data. It’s always a good idea to have one partition for your Windows install/system files and another partition for your data files. If your Windows partition becomes corrupt or inaccessible for any reason, you should hopefully still be able to access the data partition (unless the hard drive physically fails and both partitions are on the same disk).

Another basic reason for multiple partitions is if you need to install another operating system, such as Linux, onto the same disk. With separate partitions, each OS can use a different file system and they won’t interfere with each other.

If you have multiple hard drives on your system, you can also use multiple partitions to optimize your paging file and speed up performance. If you have any questions, feel free to comment. Enjoy!

How To Quit Frozen Programs In Linux