Reading: Understanding Linux Permissions and chmod Usage
Back To Top

Not that complicated, actually

I’ve been taking a course on Linux for the last few months and one aspect of Linux that always confused me was how permissions worked. For example, when uploading a file to my web server once and getting an error, I was told by my web host to change the file permissions to 755.

I had no clue what that meant, even though changing the permissions fixed the problem. I’ve now realized Linux permissions aren’t all that complicated, you just have to understand the system. In this article, I’ll talk about Linux permissions on a high-level and show you how to use the chmod command to change permissions for files and folders.

In Linux, there are basically three permissions that you will normally have to worry about: read, write and execute. All three of these are pretty self-explanatory. Now when these permissions are applied to a file, they are applied in levels.

There are three levels of permissions in Linux: owner, group and other. The owner is the user who owns the file/folder, the group includes other users in the file’s group and other just represents all other users who are not the owner or in the group.

If you look at the output from the ls -l command, you’ll notice that my practice text file has the following permissions:

This means that everyone only has read/write permissions for the file. Here’s another example:

Looking at the first bit, we can see that the permissions are for a directory. The owner has read/write/execute permissions, but the group and other users only have read permission.

So how does Linux represent read, write and execute using octal numbers? Basically, it just assigns a number to each permission as shown below.

The read permission is represented by 4, write by 2 and execute by 1. All you have to do is add them up to get the octal permission. For example, let’s take the example above where everyone has all permissions:

The owner has rwx, so we will add 4 + 2 + 1 to get a value of 7. We do the same thing for group and the same thing for other. The final octal value is 777. Let’s take a look at the example where we only gave read/write permissions:

The first octal number will be 4 + 2 since we are adding read and write. The second one will be the same as will the third octal number. Here we have a final octal value of 666.

So now let’s try it the other way. Say we want to know what permissions 755 represents? Well, it’s pretty easy to figure out if you break it down by individual numbers. The first number is 7, which we can only get by adding 4 + 2 + 1, meaning the owner has read/write/execute permission. Five can only be gotten by adding 4 + 1, meaning the group and other users have read and execute permissions. 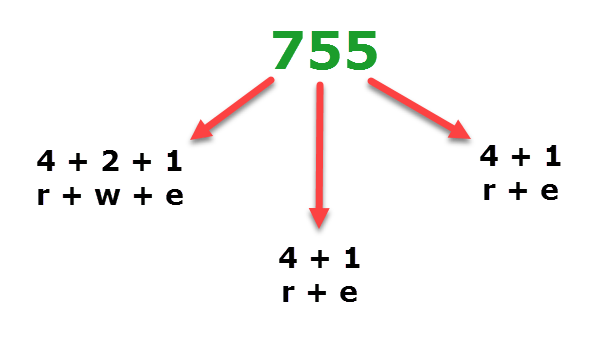 Now that we understand how to read permissions, let’s talk about how we can change them. The easiest utility to use for this purpose is the chmod command. Here’s how it works. The best way to explain the command is to go through an example.

Let’s start with the permissions we talked about above, namely:

If we wanted to add the execute permission for owner, group and other, we could go about it in two ways. We could use the symbol method or the octal method. For the symbol method, we would do the following, as shown below:

The exact command is

The syntax is as follows: the letter or letters representing the owner (u), group (g), other (o) or all (a) followed by a + for adding permissions or a – for taking away permissions and then the letter for the permission (r for read, w for write and x for execute).

As you can see here, I used to the following command to accomplish this:

So that’s all there is to using the symbol method. Now let’s talk about the octal method, which I find to be a bit easier. Octal is nice because you can add or remove permissions all in one go.

If we start with the following permissions on a file, let’s see how we can change them using the octal method:

Above, you can see I used the following command:

This basically says the owner gets read/write/execute permission and the group and other gets read permission only. As you can see, it’s easy to add or remove permissions in one simple command. Let’s keep going and say I want to change permissions again.

Now I used the following command, again a very simple one:

In conclusion, this is a very simple overview of Linux permissions and it can get a lot more complicated than this, but for beginners, it’s a good place to start. I’ll be posting more articles on more advanced permissions in the future. If you have any questions, feel free to comment. Enjoy!

How to Install Firefox for Chromebook

How To Find Out Where Those Short URLs Point To